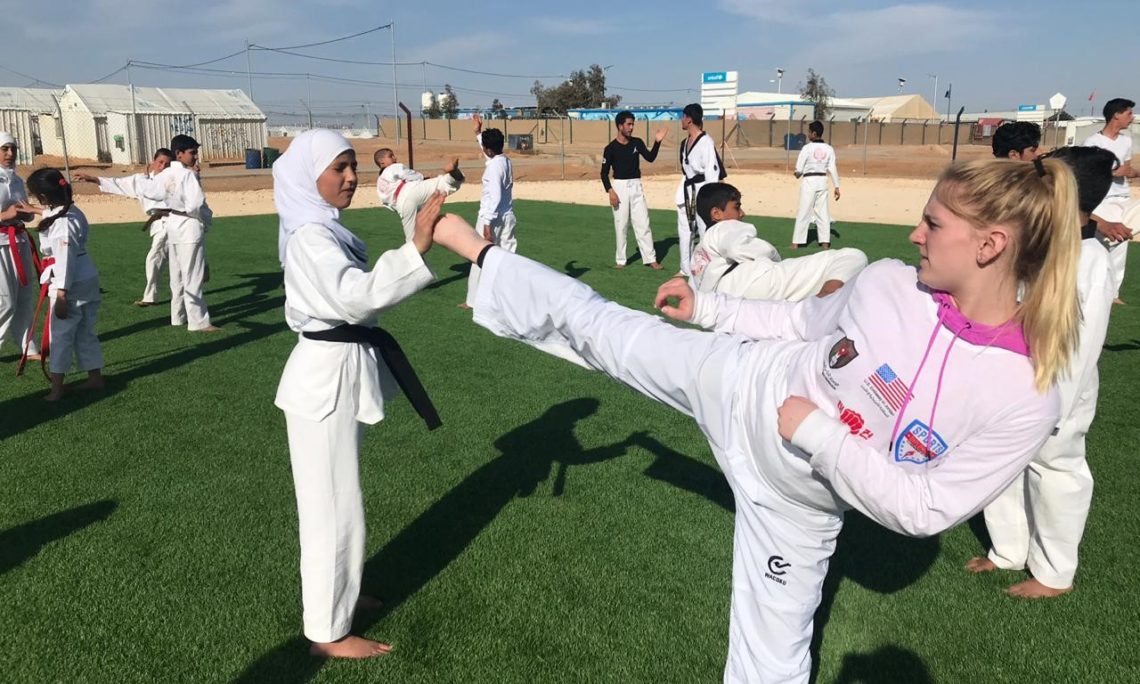 Amman — Recognizing Jordan’s success in the martial arts, a delegation of athletes led by the United States’ first gold medalist in taekwondo conducted a series of sports programs with Jordanians from April 11-16.

In collaboration with the Jordan Taekwondo Federation, the U.S. Embassy in Amman sponsored a five-day program for the American delegation led by Arlene Limas, who won the United States’ first gold medal in taekwondo in the 1988 Olympic Games. Nine other taekwondo coaches, athletes, fitness coaches, and referees accompanied Ms. Limas. The group chose to visit Jordan following the country’s historic gold medal in taekwondo in 2016 by Olympian Ahmad AbuGhoush.

The program included meetings and trainings with local public school athletes, Syrian taekwondo athletes at the Taekwondo Humanitarian Foundation’s academy at Azraq refugee camp, and workshops for Jordanian taekwondo coaches, athletes, and referees from across the Kingdom. The workshops focused on taekwondo techniques, strength and conditioning, and sports psychology, sharing the latest developments in sports in the United States.

The program culminated in a visit to the Jordan Olympic Committee’s new, state-of-the-art Preparation Center, where the delegation members toured the facility and attended a training session for Jordan’s Olympic Taekwondo Team.

Ms. Limas was impressed with the level of Jordanian sports and the country’s enthusiasm for taekwondo, in particular. “Ahmad is not just a Jordanian hero, he is an international hero. There is so much that one can learn from taekwondo and sports in general,” she said. “It is more than what happens on the mat—martial arts builds life skills such as leadership, teamwork, respect for others, and time management.”

Kala Carruthers Azar, Assistant Cultural Affairs Officer at the U.S. Embassy who helped arrange the program, said, “People-to-people exchanges like this further the strong bilateral relationship between Jordan and America. Diplomacy is no longer just about relationships between governments; it’s about connecting local populations and civil society engagement.” She added that, in the last few years alone, the U.S. Embassy has organized similar programs in both football and basketball. Next year, the Embassy plans to send a delegation of Jordanian athletes to the United States to share their expertise with American athletes.

The United States Embassy in Jordan supports a wide range of cultural programming in Jordan that engages civil society organizations and individuals in music, sports, cultural heritage preservation, and the visual arts, reaching hundreds of thousands of Jordanians in person each year.