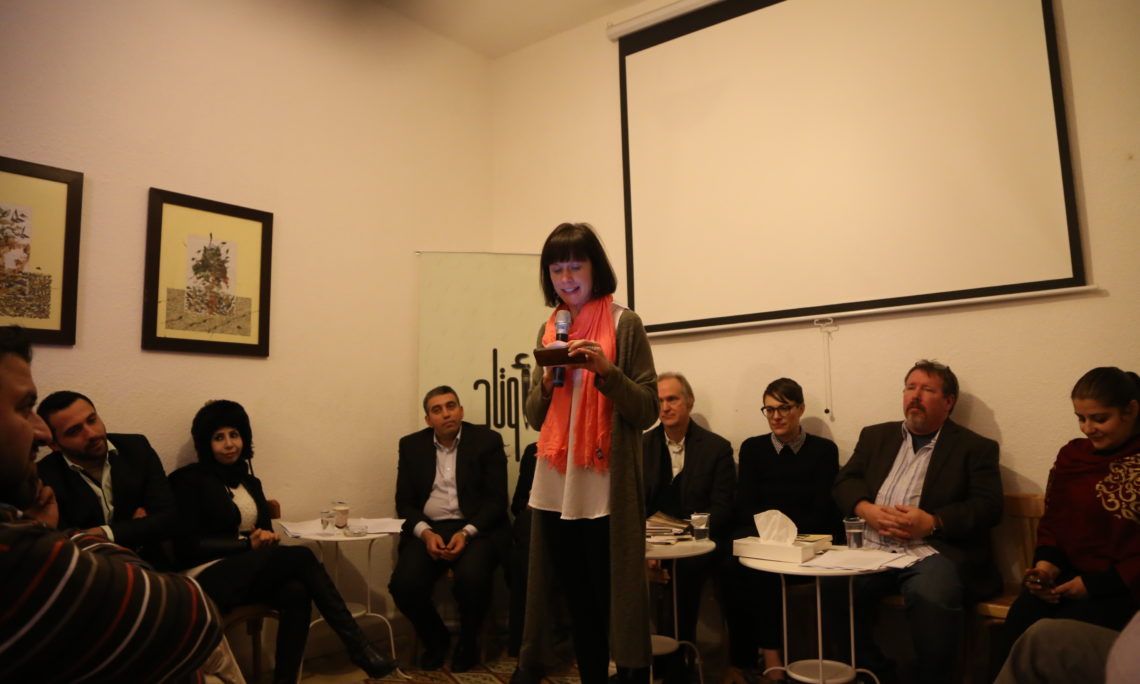 In celebration of Black History Month, PAS Amman creatively recruited award-winning spoken word poet Alysia Harris to conduct workshops for local poets – winners of a poetry video contest on the theme of identity, run by Embassy Amman on its social media platforms. The culmination of the four-day workshops, public readings, outreach sessions, and media appearances was a poetry slam, including dance, and rap songs inspired by African American culture. Ms. Harris was inspiring during her outreach events with school and university students as well as refugees in different parts of Jordan. These included Yarmouk University English Department, Hashemite University American Corner, Princess Basma Youth Centers, Access program and others. Her media articles reached broad audiences with a message of the interconnectivity that culture provides, and the importance of platforms for self-expression, particularly among youth.

Iowa Writers Bring a Flavor of U.S. Literature to Jordan

After spending four days with Jordanian poets, writers, journalists, and students, accomplished American authors Chris Merrill, Cate Dicharry, Tom Sleigh, Brian Turner and Kathryn Miles left saying “their lives were completely changed.” These five distinguished writers brought a flavor of American contemporary writing, led workshops to share ideas and their work with local writers and students, and joined local literature enthusiasts at Fann Wa Chai and Awtad literary cafes in Jabal Al-Weibdeh in two memorable evenings sharing poems and writing, and enjoying the remarkable literary creativity of their new Jordanian friends.  The writers gave presentations on contemporary American writing to literature students and academics at the University of Jordan, the American University of Madaba and Yarmouk University. They conducted lectures on storytelling in the media to journalism students at the Jordan Media Institute, Petra University and Yarmouk University. Additionally the writers held a workshop on teaching creative writing to teachers from the Queen Rania Teachers Academy and a workshop on creative writing techniques to twenty young writers from Writers Cell literary initiative. While in Amman the writers also met with faculty from Yarmouk University and the University of Jordan and with Jordanian alumni from the International Writing and Between the Lines Programs.  The authors also discussed the role of authors in promoting positive social change and accurate reporting.

May 5: Arabic Book Program Launches “Rainwater Harvesting for Drylands and Beyond, Volume 1”
To conclude the Embassy’s Earth Day activities, the Arabic Book Program and the Environmental Hub, in cooperation with the Royal Scientific Society, organized a Digital Video Conference with Brad Lancaster to launch the Arabic version of his book, “Rainwater Harvesting for Drylands and Beyond, Volume 1” at Princess Sumaya University in Amman. Over fifty local and international water specialists attended the event and interacted in a long discussion with the author. Copies of the book were provided to the participants and the organizations they represent.

February 15- Storytelling and Fun Day with Orphans at SOS
The Arabic Book Program (ABP) in cooperation with its trained storytellers and other University of Jordan students led a day of storytelling, interactive games and awareness sessions on self confidence for 20 orphans ages 7-14 at SOS Children’s Village. At the close of the activity children were given copies of ABP-translated titles on responsibility.

April 16 – The Arabic Book Program Celebrates Arab-American Author Gibran in a Special Poetry and Music Concert
In an unprecedented event at Amman’s Royal Cultural Center, over 500 Jordanian, Arab and American spectators enjoyed the reading of the works of the Arab-American author Gibran Khalil Gibran in both English and Arabic.  Not merely a bilingual poetry reading, this was a multimedia performance, created by Jordanian composer Tareq Al-Nasser whose work accompanied the display of Gibran’s art work, manuscripts and photos. Two shows celebrated the 80th anniversary of Gibran and offered the audience a unique cross cultural journey into the life of this great Arab-American writer.  Tareq Al-Nasser combined Jazz piano to Eastern instruments like the Middle Eastern flute or nai as an accompaniment to hybrid themes of the poetry.  American Embassy officers read famous passages from Gibran’s The Prophet, while other works were read by a Jordanian poet.

Watch this video of the making of the Gibran event:  http://www.youtube.com/watch?v=HV6wlEpr9HY&feature=share

December 14, 2010- ABP launches “Getting to Yes” with Author William Ury
The Arabic Book Program in Amman, in cooperation with the American Chamber of Commerce in Jordan, hosted a DVC with Dr. William L. Ury, author of “Getting to YES: Negotiating Agreement Without Giving In” on November 29 at the Amman Marriott Hotel. Dr. Ury highlighted some of the top negotiation strategies covered in the book and answered audience members’ questions.

December 22, 2010- DVC with Human Rights expert David Weissbrodt
The Arabic Book Program hosted a DVC with Professor David Weissbrodt to launch the Arabic translation of his book “Selected International Human Rights Instruments and Bibliography for Research on International Human Rights.” to an audience of graduate students at the newly established Faculty for Human Rights Studies at the University of Jordan. The event was held at the American Corner. The DVC was a discussion about human rights principles, their application and challenges to human rights in the Middle East and Jordanian contexts.

September 21- ABP Launches A New Religious America via DVC with author Diana Eck
The Arabic Book Program at the U.S. Embassy, in cooperation with the Royal Institute for Interfaith Studies, hosted a digital video conference with Professor Diana Eck from Harvard University to launch the Arabic version of her book: A New Religious America: How a “Christian Country” Has Become the World’s Most Religious Diverse Nation, at Princess Sumaya University for Technology. The DVC was followed by a rich panel discussion by His Excellency Professor Kamel Abu Jaber, Dr. Mohammad Al-Rayyan from the University of Jordan – Faculty of Sharia and Dr. Amer El-Hafi from the Center for Islamic Studies of Al-Al Beit University. Audience included journalists, religious scholars, students, academics and Jordanians involved in interfaith dialogue activities.