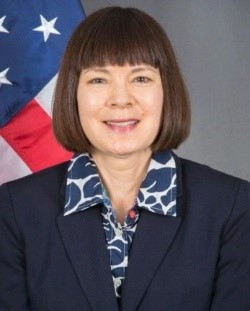 Karen Sasahara has served as Chargé d’Affaires, a.i. at the U.S. Embassy in Amman since March 2019.  She previously served as Consul General in Jerusalem from August 2018-March 2019. Before that, she was Senior Advisor/Division Chief in the Bureau for Intelligence and Research Office for the Analysis of Terrorism, Narcotics, and Crime. Prior to that she served as an assessor in the Board of Examiners from 2015-2017, as Deputy Chief of Mission in Sana’a, Yemen from July 2013 to June 2015, and as Foreign Policy Advisor to the Commanding General of Special Operations Command Central at MacDill Air Force Base in Tampa, Florida from 2012-2013.

Ms. Sasahara has spent the majority of her Foreign Service career in Middle East posts or in assignments in the Bureau of Near Eastern Affairs. Previous assignments have included: Deputy Director for Political Affairs in the Office of Iraq Affairs, Foreign Policy Advisor to the Special Envoy for the Closure of the Guantanamo Detention Facility, Deputy Counselor for Political Military Affairs at the U.S. Embassy in Baghdad, Deputy Director of the Narcotics Affairs Section at the U.S. Embassy in Mexico City, Saudi Arabia Desk Officer Chief of the Political Section at the U.S. Embassy in Beirut, Regional Affairs Officer for North Africa, Egypt, Africa, and South Asia in the Office for Counterterrorism, Libya/Tunisia Desk Officer, Staff Assistant to the Assistant Secretary for Near East Affairs, Civilian Observer with the Multinational Forces and Observer Unit in the Sinai Peninsula, Vice Consul at the U.S. Embassy in London, and Political/Economic Officer, U.S. Consulate, Jeddah, Saudi Arabia.

Ms. Sasahara is a member of the Senior Foreign Service. She holds an M.A. in Near East Studies from the George Washington University, and a B.A. in International Relations from the University of Wisconsin-Milwaukee. She was born in Cambridge, Massachusetts and was raised in the Boston area.