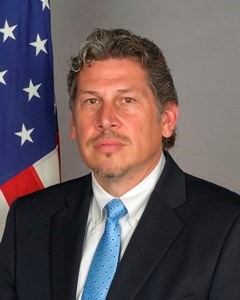 John Kowalski began his assignment in Amman as Management Counselor on August 18, 2017 and has assumed the role of Deputy Chief of Mission (Acting) since November 2018.  A career member of the Senior Foreign Service, class of Minister-Counselor, John served most previously as Deputy Chief of Mission in Namibia.  John’s U.S. government career spans three continents and 26 years including 13 years of diplomatic service in Africa.  His service includes assignments to Windhoek, Pretoria, Khartoum, Maputo, Pristina, Zagreb, Warsaw and temporary assignments to Tripoli and Kabul.   John also served in Washington, D.C., providing management support to 34 U.S. diplomatic missions in the combined Bureaus of Near Eastern and South Central Asian Affairs.

John’s overseas career began as a Fascell Fellow at the U.S. Embassy in Warsaw as part of an exchange program dedicated to the growth and strengthening of democratic institutions around the world.  He continues working in that spirit today.  He has furthered development endeavors across the African continent supporting PEPFAR programs in Namibia, South Africa and Mozambique and bolstered U.S. aid efforts in Darfur province and modern day South Sudan.

He obtained his bachelor’s degree in political science, psychology and Russian language from the University of Wisconsin in Stevens Point, Wisconsin.  He later graduated in Polish language and culture from the Jagiellonian University in Krakow, Poland.  John is fluent in Polish and speaks Greek, Portuguese, Albanian, Croatian and Russian.

He is married to Maria, and they have two children and two grandchildren.