Home Home / News & Events / In a first, NASA Chief Lands in Jordan to Promote Science, Space Exploration, and the Journey to Mars 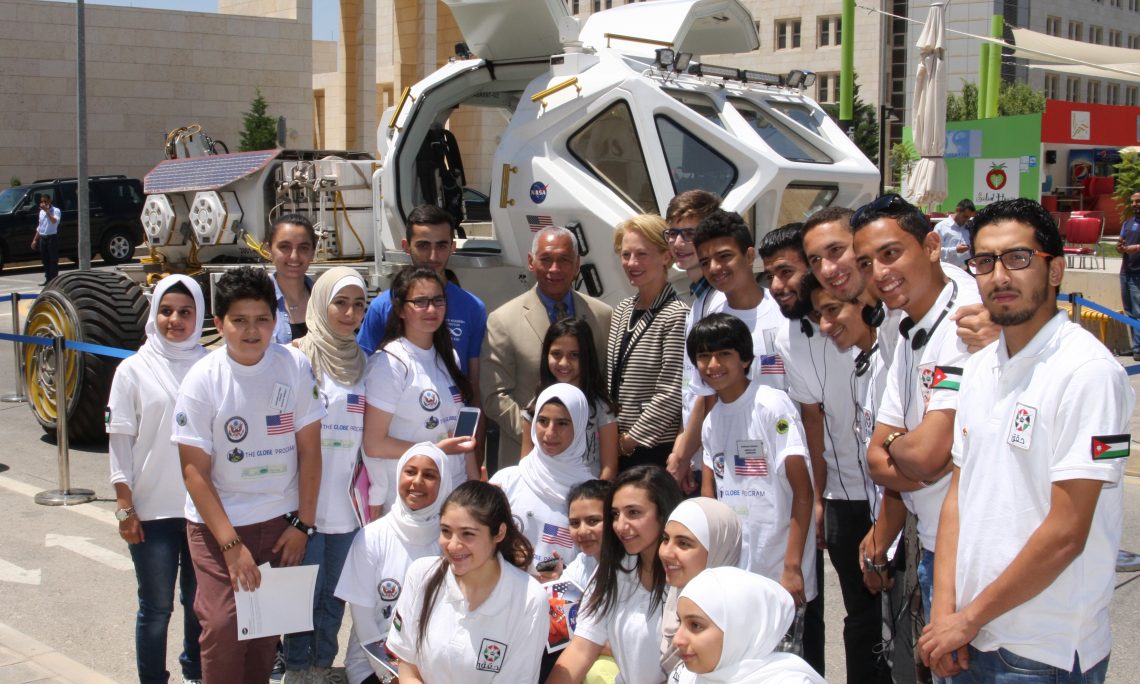 Amman- For the first time ever, the head of the United States National Aeronautics and Space Administration (NASA) has made a visit to Jordan.  Following meetings with His Majesty King Abdullah II and His Royal Highness Crown Prince Al Hussein bin Abdullah II on June 8, the agency chief, Administrator Charles F. Bolden, addressed a full auditorium of students, teachers, and space enthusiasts on June 9 at the King Hussein Business Park.  Bolden inspired the audience with his experiences as an astronaut, and the goal of sending a human mission to Mars in the 2030’s.  U.S. Ambassador to Jordan Alice G. Wells, Minister of Education Mohammad Thneibat and Minister of Higher Education Wajih Owais were in attendance.

Humanity’s Journey to Mars is a huge undertaking only made possible with many global partners.  NASA has some 750 agreements with other nations, including an International Internship agreement with Jordan, the first country in the Middle East to have such an agreement with the space agency.  While in Amman, Bolden met with Jordanian students who traveled to California and worked at NASA’s Ames Research Center through NASA’s International Internship Program in 2014 and 2015, and interns traveling to NASA this summer under the same program.  Bolden spoke about the important role of this generation of youth – the “Mars Generation as President Obama calls them – in space exploration.

When human missions to Mars begin in two decades, it will be a result of an international effort. The work happening today to build the Space Launch System rocket and Orion spacecraft, the technology tested aboard the International Space Station, and the robots already leading the way to Mars are critical to achieving the goal to bring humans to Mars.  However, as Bolden observed, “Beyond technical milestones, the baton NASA has to pass is inspiration. We’re using the inspiration of our many missions to inspire the next generation and engage people around the world.”

Human exploration is but one facet of NASA’s work. Science, technology and aeronautics are other ways that nations are collaborating across borders, seeding inspiration among some of the greatest minds of our times regardless of culture or nationality.  While in Amman, Bolden met with students from across Jordan involved in the NASA-led Global Learning and Observations to Benefit the Environment (GLOBE) Program – an international science and education program that provides students and the public worldwide with the opportunity to participate in data collection and the scientific process.  Students convened at Al Jandaweel School in Amman to present the Earth science data they are collecting and analyzing, which contributes to a shared understanding of the Earth system and global environment.

Administrator Bolden and the Ambassador will also visit the Royal Scientific Society (RSS) and meet with Her Royal Highness Princess Sumaya bint Al Hassan and other RSS leaders to discuss scientific collaboration and support Jordan’s hosting of the World Science Forum in 2017.