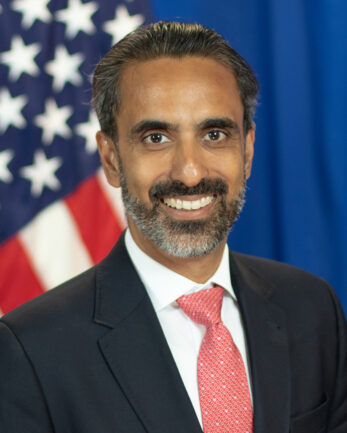 Rohit (Ro) Nepal, a career member of the Senior Foreign Service, arrived in Amman as the Deputy Chief of Mission in September 2022.
Prior to serving in Amman, Ro was the Deputy Political Counselor and Counselor for Political and Military Affairs at the U.S. Embassy in
Rome. He also served as the Deputy Director of the Office of Southern European Affairs (EUR/SE) at the Department of State and as the Counselor for Political Affairs at the U.S. Embassy in
Amman. Rohit has also served overseas in Pakistan, India, and Mexico, and has served in Washington DC as Deputy Director of the Office of Pakistan Affairs. From 2011 to 2012, Ro was a Rusk Fellow
at Georgetown University’s Institute for the Study of Diplomacy where he conducted research and taught at the School of Foreign Service. Ro is the recipient of several Superior and Meritorious Honor Awards.

Prior to joining the Foreign Service, Rohit was an attorney in New York and Alabama. He spent several years at New York law firms representing clients in complex commercial litigation. He
then worked at the Southern Poverty Law Center in Montgomery, Alabama on behalf of victims of civil rights violations in cases in state and federal courts throughout the country.
Rohit has a B.A. in Government from Hamilton College and a J.D. from New York University School of Law. He is married to another Foreign Service Officer, Ragini Gupta, who is serving as
the U.S. Consul General in Florence, Italy. Ro and Ragini have two children. Ro speaks Italian, Arabic, and Spanish.