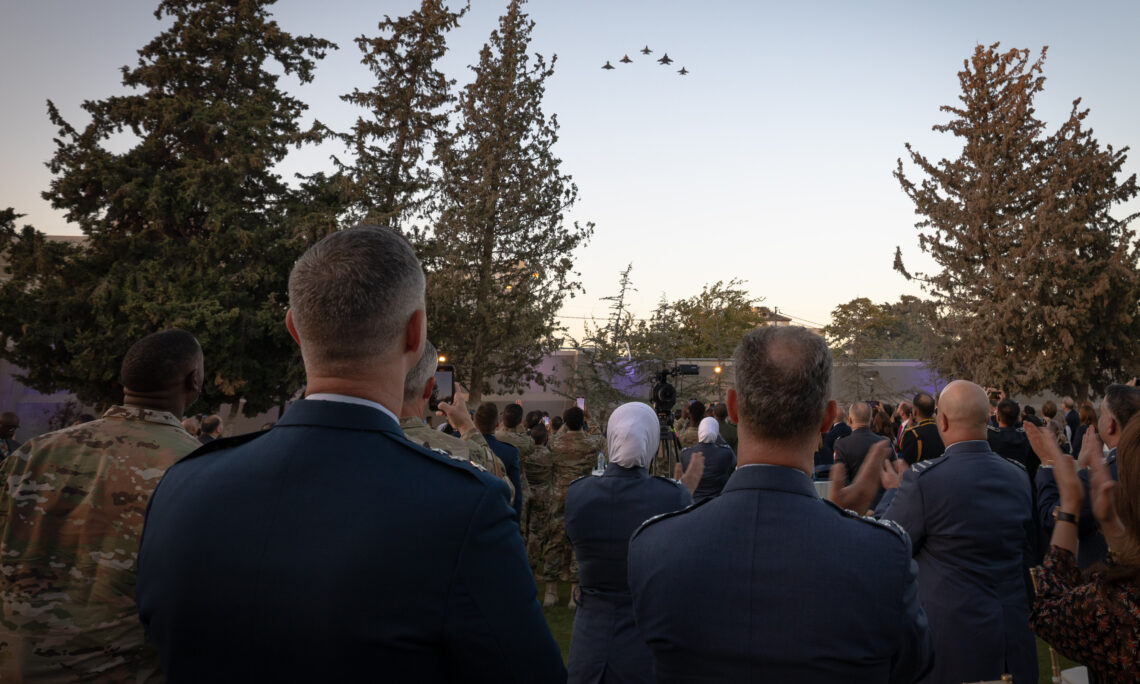 AMMAN, Jordan (Aug. 25, 2022) – Representatives of the Royal Jordanian Air Force (RJAF), United Kingdom Royal Air Force (RAF), and French Air and Space Force (AAE) will celebrate today the United States Air Force (USAF) 75th anniversary at the U.S. Embassy in Amman.  The ceremony, which will include a formation flyover led by RJAF, underscores the strength of the U.S.-Jordanian security partnership, Jordan’s leadership in regional security and stability, and the importance of partner nation coordination and interoperability.

Royal Jordanian Air Force Commander Brigadier General Mohammad Hiyasat emphasized, “The strong partnership with the USAF has founded a common language between our airmen.  We the RJAF look forward to more cooperation at all levels with the USAF to sustain global peace and support freedom.”  Lieutenant General Alexus Grynkewich, Commander of U.S. Air Forces Central, praised the historical partnership between the USAF and RJAF which includes combined training and personnel exchanges as well as combat operations in support of regional security: “Through partnerships like ours, and working together with likeminded nations, our airmen ensure the safety and prosperity of the region and counter global threats.”

In a partner nation salute for the United States Air Force 75th anniversary, RJAF will lead American, British, and French aircraft in a flyover across downtown Amman and the United States Embassy.  One RJAF F-16 will head the formation, followed by one USAF F-15 and one AAE Rafale, with the formation completed at the back by one RAF Eurofighter Typhoon and one additional RJAF F-16.  These fighter aircraft, designed for air superiority and ground strike roles, showcase the capability, interoperability, and partnership of their respective countries’ air forces and commitment to regional stability and security.

RAF Air Component Commander, Air Commodore Mark Farrell, noted: “83 Expeditionary Air Wing is delighted to support our close ally in celebrating the momentous occasion of their 75th anniversary, and to fly alongside our friends and partners in a demonstration of our enduring commitment to them and our shared goals of peace and stability in the Middle East.”  The AAE spokesperson also celebrated the show of unity, saying “The cooperation and partnership between the French Air and Space Force and United States Air Force is precious. For more than a century, French and American Aviators have flown in formation, wing to wing, as brothers in arms. We’re sharing common goals to ensure peace and stability around the world. The participation of a Rafale to the flyover materialized the quality of our partnership.”

In addition to the Jordanian and U.S. national anthems, the ceremony featured performances by the Air Force Central (AFCENT) Band.  In events prior to the anniversary celebration, the AFCENT Band connected with local audiences in Jordan through cultural exchange events to deepen relationships with the people of Jordan, developing and nurturing relationships that extend beyond sharing music.  Musical performances by the AFCENT Bank provide an experiential representation of USAF commitment to the region, the value the United States places in security cooperation with Jordan, and the strength of the bilateral partnership.

The U.S. Air Force approaches its 75th anniversary on September 18, 2022 with a mission to “Innovate, Accelerate and Thrive,” working hand-in-hand with partners and allies to promote global security.