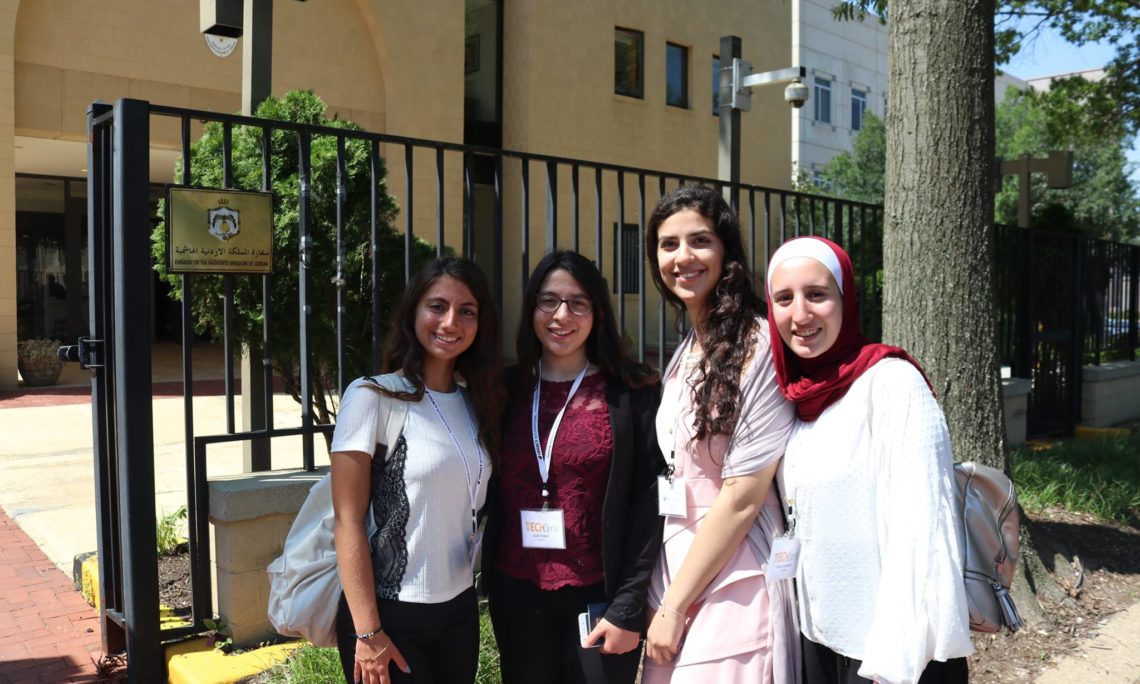 Twenty-eight teenage girls from Algeria, Egypt, Jordan, Lebanon, Morocco, Palestinian Territories, and Tunisia will participate in the U.S. Department of State’s TechGirls exchange program from July 8–August 1, 2018. Four of the twenty-eight are from Jordan. During their three weeks in the United States, participants will strengthen and develop technical skills, form invaluable networks, and establish relationships with mentors that will influence their future tech careers.
The TechGirls initiative empowers girls around the world to become leaders in the science, technology, engineering, and math (STEM) fields. The TechGirls will stay with host families for one weekend in Southern Virginia to experience life with an American family.
The exchange’s centerpiece will be an eight-day, interactive Java coding camp hosted and implemented by the Department of Computer Science Training at Virginia Tech in Blacksburg, VA that will include five competitively-selected American peer participants from Pennsylvania, New Jersey, and Virginia.
Following the coding camp, the teens will participate in a two-day program on campus conducted by the Center for the Enhancement of Engineering Diversity (CEED). The Virginia Tech programming will be complemented by Washington, D.C.-based activities including leadership clinics, action planning workshops, community service opportunities, and a day of job shadowing with top tech companies in the area. Top leaders in the tech industry from the United States, the Middle East, and North Africa, including TechWomen program alumnae, will mentor the girls throughout the program.
The State Department and program partner Legacy International have teamed up with many public and private sector partners for this year’s TechGirls program, including AT&T, Echo & Co, the Federal Communications Commission (FCC), iStrategy Labs, Islamic Relief, Nokia, NPR, Relief International, Synoptos, and TechChange.
TechGirls exchange alumnae, now totaling 158, have utilized the program’s lessons to train more than 3,100 peers in their home countries. The achievements of these alumnae and the talent of the incoming class contribute to the U.S. global commitment to grow the global economy and advance the rights of women and girls around the world, as well as STEM education.
Join the conversation on Facebook or Twitter using hashtag #TechGirls. For media inquiries, please contact the Bureau of Educational and Cultural Affairs at eca-press@state.gov.
###