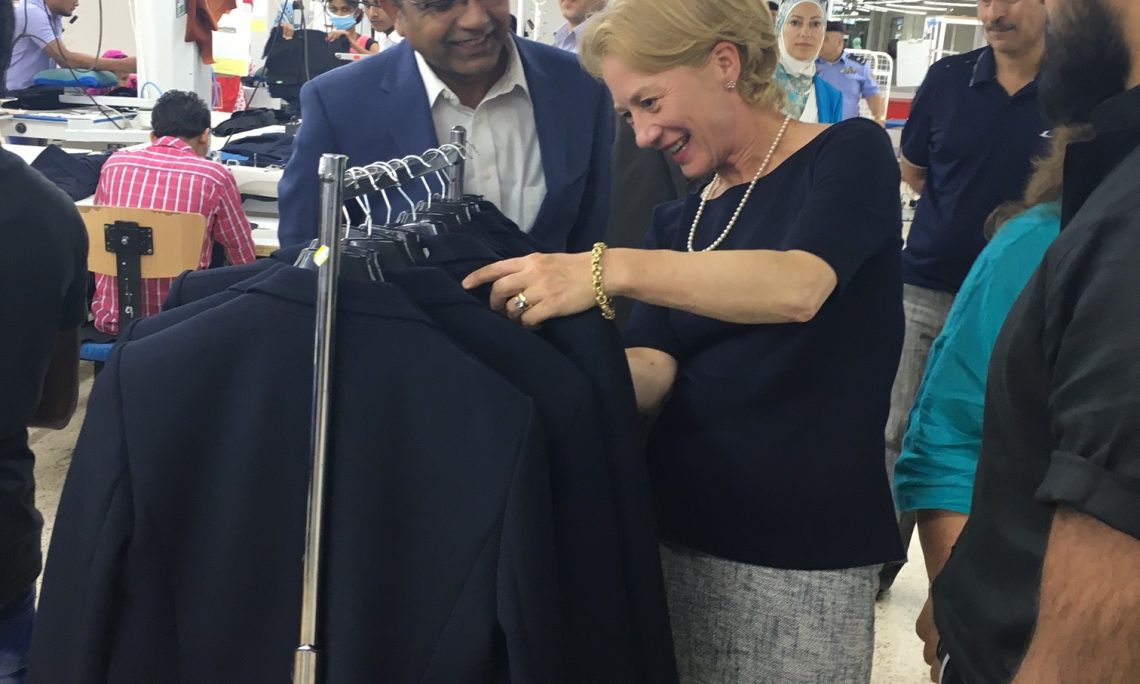 Ad Dulail– U.S. Ambassador Alice G. Wells visited today the Ad Dulail Industrial Park to meet with companies and workers manufacturing textile products for export to the United States under the preferences of the 2001 U.S. Jordan Free Trade Agreement (FTA).  The textile factories in the Industrial Park employ over 3500 Jordanians, some of the estimated 50,000 jobs created by the FTA.

In a meeting with the exporters, Ambassador Wells discussed opportunities for firms in the park to continue expanding their exports under the FTA and under the new EU market access secured through the Jordan Compact.  She noted, “We are proud of the over 800% growth in bilateral trade since the U.S.-Jordan FTA was signed.  We discussed the exporters’ strong relationships with a number of high-end U.S. firms. We also aim to expand commercial ties and seize new market opportunities, like those offered by the Jordan Compact, to create jobs for Jordanians and the refugees Jordan hosts.”

Under a 2015 Memorandum of Understanding, USAID’s Workforce Development Program is working with companies in Ad Dulaهl Industrial Park to train over 500 Jordanians to be employed in the park, as well as supporting Syrian refugee participation in the program.

Ad Dulayl Industrial Park exports 35% of Jordanian garment products to the United States.  Its exports reached $465 million in 2015 and $234 million during the first half of 2016, remaining on trend for another record year.  Among other firms, Ad Dulayl is home to Needle Craft, which produces 25% of Under Armour’s global products, and Eam Maliban, producer of high-end U.S. brands like Burberry, Talbots, and Banana Republic.