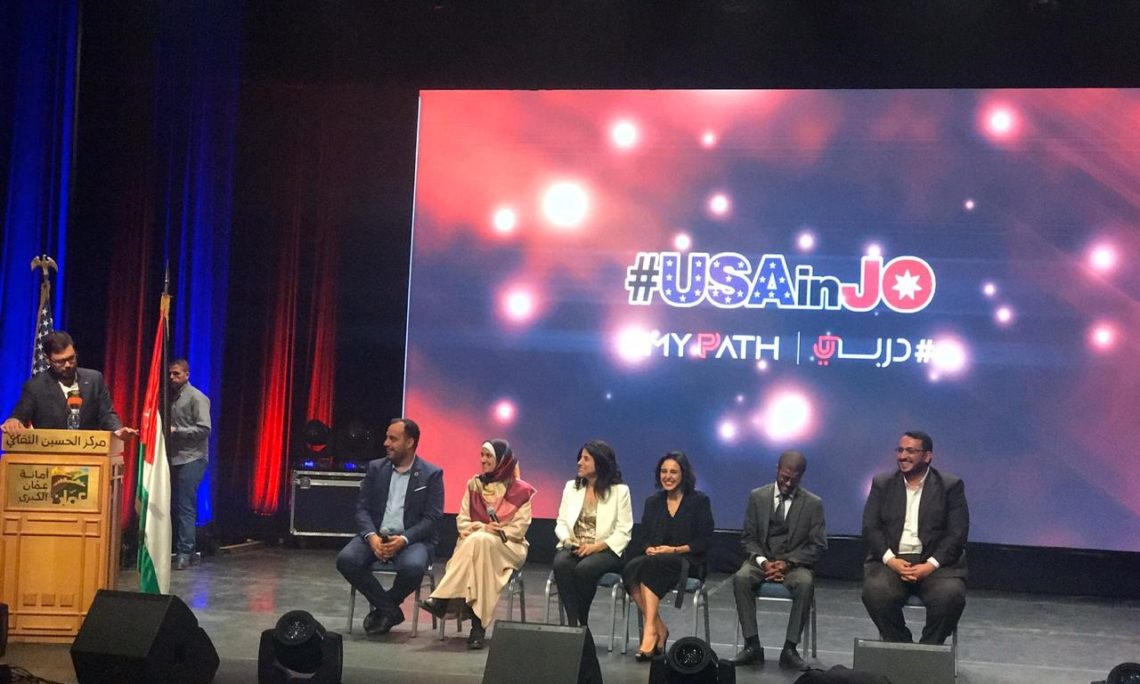 Participant of the My Path Initiative

U.S. Embassy Chargé d’Affaires Karen Sasahara announced on Monday, October 28, the official launch of the “My Path” Initiative, or Darbi, a series of social media videos featuring Jordanian alumni of U.S. government exchange programs who have built their own career paths to professional success. The first six videos focused on Jordanians from across the Kingdom, from Ma’an to Irbid, who have played critical roles in supporting the development of their communities and the next generation of achievers.

The My Path launch event took place at Al Hussein Cultural Center in Downtown Amman, where the Embassy showed the first six short videos to an audience of U.S. government program alumni, entrepreneurs, journalists, social media influencers, and others from across Jordan. Dr. Thabet Al-Nabulsi, Secretary General of the Ministry of Youth, also attended the opening.  The six Jordanians featured in the videos participated in a panel discussion expanding on My Path’s central theme: inspiring Jordanian youth to make their own success stories and find their own paths. (See below for full bios on each participant.)

“We have met many of these individuals through their participation in educational and cultural exchange programs sponsored by the U.S. Department of State, programs aimed at strengthening the seven-decade-long friendship between Jordan and the United States,” Ms. Sasahara said at the event. “There are scores of young people in this country who are finding their paths to success – both for themselves and their families and their communities. They’re doing it here in Amman, in Irbid, in Ma’an, in Jerash – all over Jordan.”

Over the next two weeks, the U.S. Embassy will post the six initial videos on its Facebook page and encourage followers to share stories about their own paths to developing themselves, their communities and Jordan as a whole. The Embassy will also launch a contest on its Instagram account, encouraging followers to share photos of the My Path / Darbi logo when they see it on public buses.

In the months ahead, the Embassy will continue to feature stories about exceptional exchange program alumni who are making a difference in Jordan on our Facebook page and Instagram account, using the hashtags: #USAinJO and #MyPath.

Meet the “My Path” participants:

Mohammad Al Masri is a 17-year-old alumnus of the Access English program in Irbid. He is preparing for the Tawjhi at the Khaled bin Alwaleed School and has worked on a wide variety of civil society initiatives to benefit his community, including the project “Our Passion,” which helps cancer patients in Irbid, and “Ambassadors of Peace,” which helps youth gain leadership skills.

Saddam Sayyaleh, of Jerash, is founder of the “I Learn” education initiative, which establishes safe spaces for children throughout Jordan that encourage intellectual growth, critical thinking, and innovation. With help from more than 600 local volunteers every year, I Learn teaches programming, English, vocational skills, art, music and drama to children ages 10 to 14 from a range of backgrounds at seven centers across Jordan.

Malak Al Akiely, of Amman, is founder and Chief Executive Officer of Golden Wheat for Grain Trading Ltd.  She is also a co-partner in Golden Kayan for Marketing Consulting Co. for Oil, Energy & Renewable Energy, and is a founding member of the Jordan Economic Forum. She has over ten years of experience in agricultural commodities trading with a focus on food security.  She is also director of the Women BeeBuzzers project, which aims to introduce beekeeping as a source of income for rural areas in Jordan.  She was named as a “Young Global Leader” by the World Economic Forum in 2017.

Rakan Al Rowad is founder and general manager of Al Qantara Center for Human Resources Development in Ma’an, which helps thousands of young people through courses that focus on practical life skills and encouraging political, economic and social participation. His center received the King’s Order of Distinction of the Third Degree for its work.

Ala’a Suleiman, of Amman, is the co-founder of Masmoo3 For Audio Knowledge, one of the first providers of digital audio books in both Jordan and the region.  She has also published books for children focused on promoting ethics and tolerance, and she is currently working on more books covering diverse topics.

Lara Ayoub, of Amman, is digital director in the digital and social media department of Al Mamlaka TV. She is the co-founder of SADAQA, a nonprofit promoting child daycare in the workplace. Lara was selected as one of the top 100 women in the Vital Voices Global Leadership Network and is this year’s winner of the Goldman Sachs – Fortune Global Women Leaders Award.